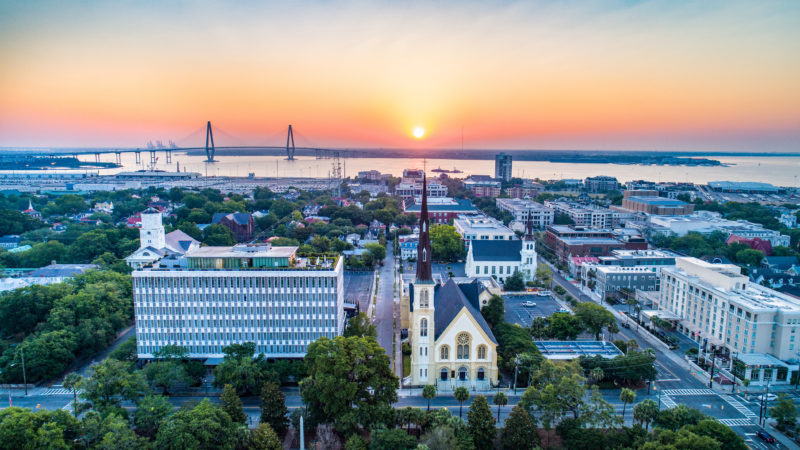 At long last, we are ready to reveal the details for our annual Litigation Seminar, which is open to all of our co-counsel friends. This will be the first time we have held the seminar in the fall, and we have made it even bigger and better than in the past.

First, we’ve really upped our hotel game. We will be over at The Dewberry Hotel, which opened in 2016 on the Meeting Street side of Marion Square. This building, which once housed the IRS of all things, was completely rehabbed into a mid-century modern style and is well-regarded as a top luxury hotel in the country. The CLE itself will be held at the Charleston Gaillard Center, which is just a block or so away on Calhoun Street. We couldn’t be more excited to welcome our keynote speaker to Charleston. Walter V. Robinson, editor at large of the Boston Globe, led the investigative team that broke the Roman Catholic Church scandal. He was portrayed in the movie Spotlight by Michael Keaton.

We expect the seminar to qualify for approximately 7 CLE hours, including one hour of ethics. The seminar is free to our co-counsel.

Register for the Seminar

We have reserved a block of rooms at The Dewberry Hotel, one of the top luxury hotels in the country, for $319/night. To reserve a room you must call the hotel at 843-558-8000 and reference the RPWB Seminar.

UPDATE: As of Sept. 17th, The Dewberry Hotel reports that the block of rooms has been exhausted, although attendees are still able to book rooms at the market rate. You may also wish to book a room at the venerable Francis Marion Hotel, located across Marion Square from The Dewberry. Other options include Courtyard by Marriott and Hotel Bella Grace, which are in between The Dewberry and the Charleston Gaillard Center, where the seminar is being held.

If you would like to be put on a waiting list for The Dewberry room block in the event of cancellations or need additional assistance, please email Daniel Brownstein at dbrownstein@rpwb.com

Join us on the rooftop of The Dewberry for cocktails and stunning views of Charleston at sunset.

Since bursting onto the scene in 2018, Parcel 32 has earned rave reviews from restaurant critics and diners alike. The restaurant was reimagined, redesigned and relaunched by Patrick Properties Hospitality Group after an 18-year run by the restaurant’s predecessor, Fish. Named after the property’s designation on an 1888 fire insurance map, Parcel 32 straddles the history of the Lowcountry, from the heirloom ingredients our region was renowned for in the first place to the worldly influences that have made the Charleston food scene among the most celebrated in the United States. Shuttles will be available to transport guests to and from the hotel, although you might prefer to walk in order to take in Upper King Street’s bustling nightlife.

Walter V. Robinson is an investigative reporter for The Boston Globe, where he is best known for his work exposing the sex abuse scandal within the Roman Catholic Church. The coverage he led as assistant managing editor of investigations won the 2003 Pulitzer Prize for Public Service and was later developed into the movie, Spotlight (He was portrayed by Michael Keaton). The last investigation Robinson led for the Spotlight Team, called “Debtors Hell,” exposed the practices of debt collectors and was a finalist for the Local Reporting Pulitzer in 2007. During his time at the Globe, Robinson reported from 48 states and more than 30 countries. He currently holds the title of editor-at-large of the Boston Globe and is the Edith Kinney Gaylord Visiting Professor in Investigative Journalism at the Walter Cronkite School of Journalism and Mass Communication at Arizona State University.

By now, you probably know that spring is a great time to visit Charleston, South Carolina. But we’re going to let you in on a little secret: many locals prefer the fall. The days are usually warm — but not oppressive — and there is a slight chill to the air after sunset. Our walkable city comes alive with activity under the golden, autumn sun and clear starry nights.

The Dewberry Hotel, and its distinctive mid-century modern charm, provides a captivating backdrop for an autumn evening spent under the stars and steeples of the Holy City. We are thrilled to invite you to the private ballroom and walled garden of one of the top luxury hotels in the United States where we will celebrate two Lowcountry delicacies at the height of their seasons: oysters and white shrimp.

Come enjoy this starry night with good friends, music by the Charleston Latin Jazz Collective and, of course, the best in libations and local cuisine. Valet parking is available for a charge.